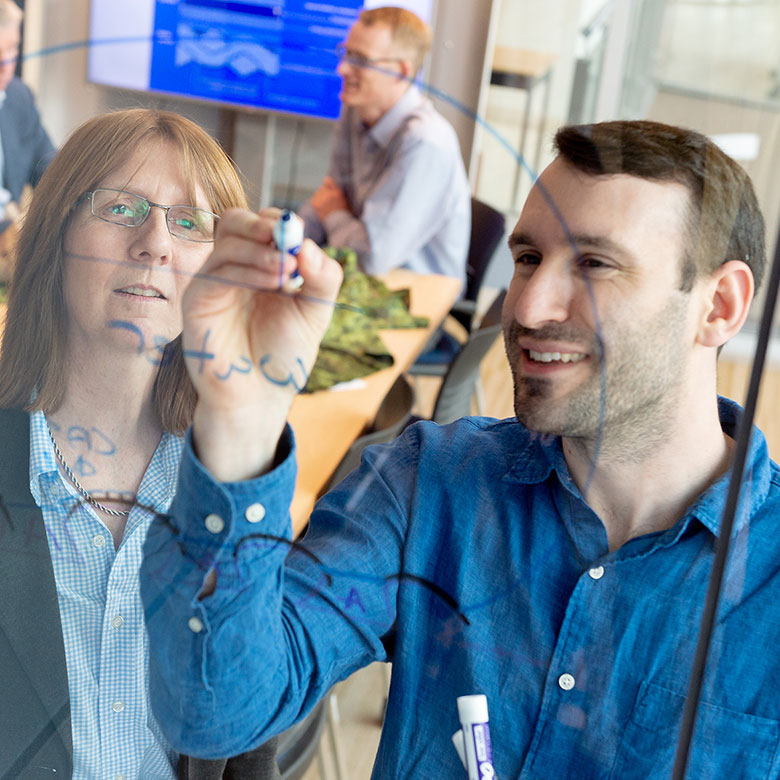 FROM THE TURMOIL OF NATURAL DISASTERS AND CONFLICT ZONES to climates ranging from the heat of the Saharan desert to the sub-zero arctic, Canadian military personnel work in extreme conditions that demand innovative protective gear. 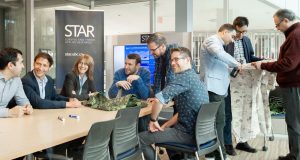 UBC Okanagan Assistant Professor of Mechanical Engineering Kevin Golovin has assembled a team of the nation’s most esteemed scientific researchers and industry leaders to create and test new textile technologies and body armour solutions for the Canadian Armed Forces.

The network — called Comfort-Optimized Materials for Operational Resilience, Thermal-transport and Survivability, or COMFORTS — involves 11 researchers from the University of British Columbia, two lead collaborators at the University of Alberta and the University of Victoria, and numerous industry leaders in the defence and security sector, including Kelowna-based PRE Labs, Helios Global Technologies, and EPIC Ventures in Victoria. 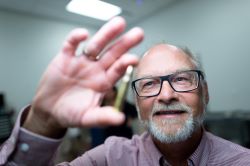 Kelowna-based PRE Labs stays at the forefront of the high-performance body armour sector by collaborating to develop and apply leading-edge research and technology. CEO Brad Field has guided the design of hundreds of patented products during his 30-year career and understands the need for made in Canada solutions derived from a team-based approach.

Armour innovation, says Field, is more than just new product creation. It requires an understanding of changing customer needs, new materials that can meet those needs, and new manufacturing and testing processes that increase performance. Partnering with UBC STAR was a natural step for PRE Labs, bringing access to leading-edge researchers and state of the art testing capabilities.

“UBC STAR made a huge difference to our business – enabling us to collaborate with a whole network of defence partners and researchers really elevated our products.”

With UBC STAR’s support, PRE Labs won a Built in Canada Innovation contract, alongside a Defence Research and Development Canada contract to develop a modular armour system. The system requires significant testing, which PRE Labs previously conducted at a facility in the eastern United States.

Now, the majority of PRE Labs testing is conducted in the Central Okanagan at UBC STAR’s Impact Research Facility (SIRF), where ballistic and blast performance of armour can be comprehensively evaluated. Field explains: “The proximity of SIRF not only cut down on shipping costs and time, it allowed for a more rapid assessment of data and ultimately led to an improved product.”

PRE Labs is also working with UBC researchers to develop clothing that senses and protects against chemical and biological hazards and is part of a UBC-led innovation network supported by the Innovation for Defence Excellence and Security program.

Field is optimistic that this R&D-intensive path is good for people and good for company growth: “We’re protecting first responders working to respond to natural disaster, military personnel, and people doing dangerous jobs in remote locations. It’s very rewarding, and we see great potential for Canadian companies to be significant global players.” 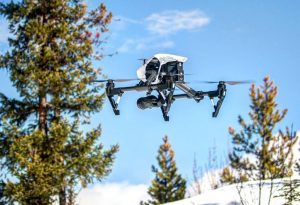 Successfully applying artificial intelligence and sensors to identify specific objects in the complex natural environment motivated the TerraSense team to explore opportunities in other sectors.

With the support of UBC STAR, the company has successfully applied its capabilities to solve safety and security challenges. Working in close collaboration with UBC researchers, TerraSense was awarded an Innovation for Defence Excellence and Security competitive project contract to develop a Multimodal Input Surveillance & Tracking (MIST) technology that identifies objects of interest using video feeds transmitted from remote locations, including search and rescue aircraft.

TerraSense is currently operating from UBC STAR’s incubator, where its staff sit alongside UBC students and faculty.“TerraSense’s machine learning experts collaborating with UBC STAR researchers creates a network of problem-solvers helping us sharpen our focus while connecting us to new opportunities in safety and security with excellent prospects for export to market in other countries,” says TerraSense Analytics Director Steve Milne.

When asked to point to the bigger difference UBC STAR makes to TerraSense, Milne is quick to acknowledge: “UBC STAR helps us step toward the future, while keeping up with opportunities today. As we grow, we are also creating work experience opportunities for students and we are very happy to have UBC graduates joining our workforce.”

Peter O’Brien exemplifies the measure of a successful early-stage entrepreneur. He went from sleeping on the floor of his mentor’s lab to co-founding VO2 Master, the world’s first Bluetooth oxygen-sensing device for endurance athletes. 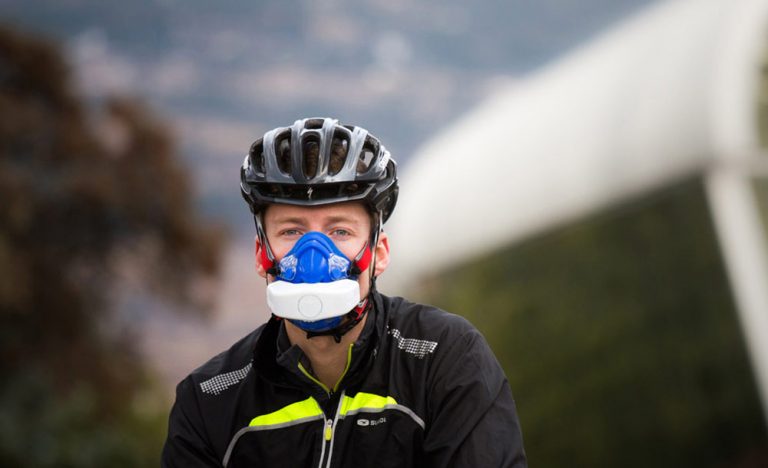 Maximal oxygen uptake — VO2 max — is an indicator of an athlete’s cardiovascular fitness and aerobic endurance. Results are typically monitored in a clinical setting, under strict protocols, and miles away from an athlete’s natural training environment on the road, trail or track.  Conventional VO2 analyzers are big, bulky and expensive. They weigh at least five pounds, are as big as a breadbox, and cost up to $10,000.

In early 2013, he co-founded VO2 Master with his former coach and mentor, Dr. Andrew Sellars, a physician with more than 15 years of experience actively testing and training athletes.  The two teamed up to create a new VO2 monitoring device that would eliminate the barriers of existing commercial devices.

After a year of trial and error, O’Brien returned to UBC Okanagan for research guidance and technical support to design, build and test a prototype of his invention.  He connected with the UBC Survive and Thrive Applied Research (STAR) initiative and Associate Professor, Kenneth Chau, an electrical engineer in the School of Engineering.

When O’Brien was ready to move to the prototype phase of development, he didn’t have to go far. UBC’s Survive and Thrive Applied Research (STAR) initiative offered him affordable access to a high-calibre 3D printer, technical expertise and liaison support just steps away from Chau’s lab.  Over two years and 18 major mechanical versions later, the team produced a palm-sized prototype that could collect quality oxygen-consumption data and transmit it, in real time, to any smartphone or mobile device.

“Having access to both engineering talent and rapid prototyping, in close proximity, provided us with a foundation for success.”

The VO2 Master is the first analyzer ever designed to use the force of human breathing as a passive gas-sampling pump, making it lightweight, portable and easy-to-use.  VO2 Master recently launched its first post-beta, market-tested offering of VO2 Master Pros at the ITU Science and Triathlon Conference in Edmonton, Alberta. 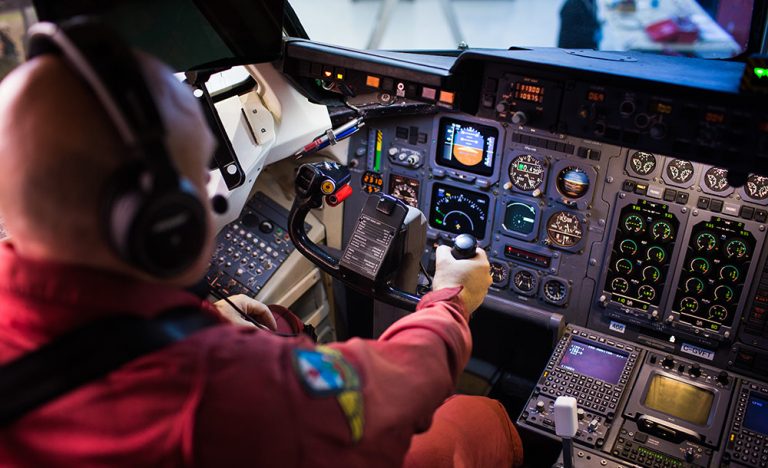 Few Canadians are left unaffected by the more than 6,000 fires that burn across the country each year, damaging 3.95 million hectares – according to the National Wildland Fire Situation Report.

Among them, are the hundreds of men and women who pilot loaded airtankers above the treetops to battle the nearly 2,000 wildfires that swept across the province each summer.

For Conair — a company specializing in aerial forest fire fighting — and its staff of experienced pilots, this is a seasonal reality and the driving force behind a new collaboration with the UBC Survive and Thrive Applied Research (STAR) initiative.

In July 2015, the Consortium for Aerospace Research and Innovation in Canada (CARIC) announced funding for the innovative project that brings together partners, specially selected for their relevant experience and expertise, from across the country.

Over the past three years, UBC STAR researchers have been collaborating with Camosun College, Latitude Technologies and Conair to analyze past flight data, conduct fatigue tests in regular and simulator flight scenarios, and identify and quantify fatigue factors. 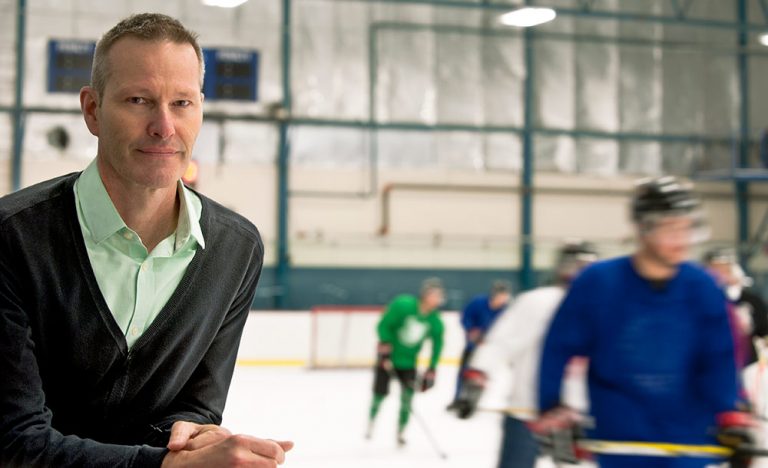 A partnership between UBC Okanagan and Imperial College London (UK) focused on development of a new helmet that could one day reduce sports-related concussions.

Professors Peter Childs and Dan Plant from Imperial College collaborated with Professor Paul van Donkelaar, director of UBC’s School of Health and Exercise Sciences at UBC’s Okanagan campus to explore applications for a novel new material called Armourgel — a light, flexible material that absorbs shock on impact and can reduce physical harm from falls or other kinds of contact.

“Sport-related concussion is becoming a major concern for athletes, parents, coaches, and sport associations,” says van Donkelaar. “Finding ways to improve the safety of contact sports is one key approach to mitigating the risks of concussion. The development of Armourgel helmets could be a step in the right direction to making contact sports safer.”

Professor van Donkelaar worked with Armourgel and Kelowna’s Helios Global Technologies to develop a helmet liner that could lessen the impact of blows to the head, specifically in contact sports.  His research examined the damage sustained by young athletes who have been concussed while playing sports, particularly those who have had more than one concussion.

Part of this work examines how concussions can affect blood flow to the brain, how this impacts neurocognitive function, and how to determine when young athletes are physically ready to begin playing a contact sport again.

“The access to first-class equipment at the STAR facility, as well as the world-class knowledge and expertise at UBC, is truly valuable on a global scale—and especially beneficial to SMEs. Being a part of a larger interdisciplinary team through STAR allows us to further our research and try new things we otherwise couldn’t do.”

In van Donkelaar’s lab, Plant presented several variations of the Armourgel product, and explained how it can be manufactured in different thicknesses, and can be applied in many ways. The goal now is to work on a prototype helmet liner that may one day become standard safety equipment for those who play contact sports.